I followed a cat to see what he did,
Followed and stalked and stealthily hid.
After some mischief and three weeks of sleep
He yawned at the world and sank to his keep.
I watched him pull out a thicker dog suit
Along with two pairs of bigger paw boots.
He put it all on in a great furry fog
And with a wag of his tail that cat was a dog!
That new dog got up and swaggered on out,
Leaving me in a pile of “What’s this all about?”
When I noticed some scales, then feathers, a fin,
That beast had other beast suits by the bin!
But when I saw a human suit I froze,
‘Cause an old possibility was no longer closed.
I tugged at myself to see if I gave,
This was the time to dig deep and be brave.
I looked in the mirror and to my small surprise
Found myself staring straight into wolf eyes.
I had to get off one howl at the moon
And then dug deeper – Emu! Tortoise! Raccoon!
I never knew how much of me was down here!
Next was a snake! Eagle! Mouse deer!
I found bugs below slugs under bugs!
I was made up of many animal hugs!
I had to find out – how deep did I go?
I keep on digging so someday I’ll know. 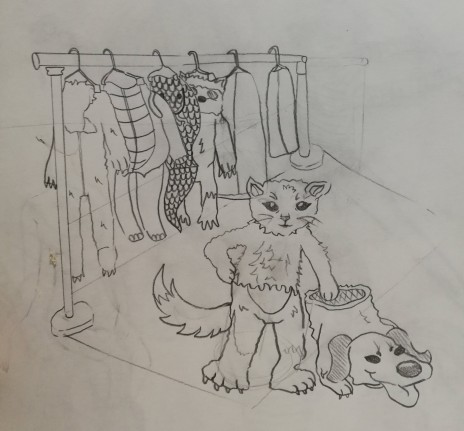 9) Happy Birthday to Me