The sea bit down with a crashing frown
On the strangest shore it ever found.
Where so many things had been left to drown
In a deep tooth mark torn in the ground
A life popped up this time around.

A group of men who’d never been
Beyond their town’s enchanting end
Scooped that baby up and grinned:
“What heroes we are!  We’ve done it again!
Raise the town poet, he’s ballads to pen!”

They left her alone at the coward’s home
‘Cause a strong YES means never a no.
He opened his door, cautious and slow,
With worry aswirl in his hum-drum dome
And gave her the most beautiful name of Woe. 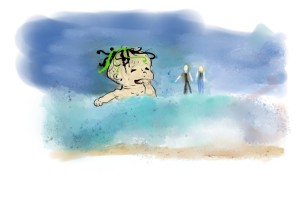 The coward hid from all that did
So he’d never have to give
An errant care, indeed he slid
Below life’s lowest bid.
He didn’t dare to live.

The heroic coots bought matching suits
So no one could forget
The deed they’d done.  Those loopy fruits
Dressed in tiger stripes from hat to boots
On weekly walks to make sure Woe was fit.

Their checks made clear he held Woe dear,
The coward found something rare.
A reason to steer straight into his fear,
For Woe awoke an ocean of cheer
And the strength to fight off a scare.

Woe was aware of the inspired care
That her coward could require.
He fled from mice, he feared the very air,
Few things weren’t a threat to his derriere.
It was an extreme you must admire.

Terror never tires, nor is quite so dire
As to demand unbearable despair.
When Woe needed her coward there
He showed up with the scaredest glare
For any deserving of his ire.

So when the worst stared square at the pair,
Woe and her coward held their heads higher,
For each one was exactly where
They needed to be in order to share
Whatever might transpire.

The earth is slow but when it goes
All else will fall if it says so.
Woe was of the earth’s worst foe,
Now that it rose none could oppose,
Not coward, not Woe, not her hopeless heroes.

Once the end’s begun and won’t be won
Is quite the wrong time to become glum.
The coward and Woe watched the land undone,
With nowhere to go they could only run from,
But together they’d be, whatever might come.

The rocks gave a screech and the hills tried to reach
Past a coward, but just couldn’t catch
Them rabbiting down the final stretch
Of their town to where the lives of each
Were changed on that baby bearing beach.

The sea swept in with a smashing grin
To the strangest shore it ever spent
A drop of thought and then it went
And licked the coward and Woe up when
The earth split wide with wintry intent.

The sea took back Woe with coward in tow –
To leave one would be leaving the two.
Now they sail below the deepest blue
In a land lost to land long ago
That only the sunken sea beasts know.

The sea suits itself, from whimsied waves to buried roots,
The earth’s content as peaceful brute,
There’s not a thing to change about a heroic coot,
And that finely flawed father-daughter duo shoots
Through life in fearfully happy cahoots.

9) Happy Birthday to Me